All we need to know about Google Android 8.1 Oreo (Go edition) 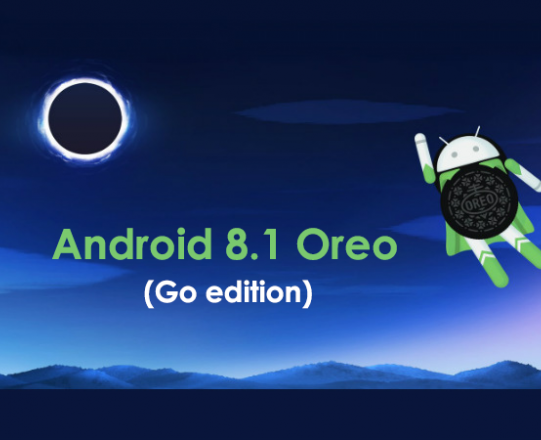 All you need to know about Google Android 8.1 Oreo (Go edition)

After its brief introduction at Google I/O earlier, Google has now officially launched Android Go, the company’s new software project designed for developing markets. Google has opened up Android Go or we can call Android Oreo (Go edition), to OEMs who can now start developing for the platform, and has launched a new section of the Android site dedicated to the system.

What is Android go?

In essence, Android Go is a lightweight version of Android Oreo, comprised of three, optimized areas: the operating system, the Google Play Store, and the Google apps. These have been reimagined for Android Oreo (Go edition) to make them run better on lesser hardware. Android 8.1 Oreo is another exciting step toward bringing to life google's vision of an AI-first mobile platform, for everyone, everywhere.

Starting with Android 8.1, google is making Android a great platform for entry-level and budget devices in the Android Oreo (Go edition) configuration. Following are the new features and configurations that a developer as well as user wants to know about the latest release from Google:

Memory optimizations: Improved memory usage across the platform to ensure that apps can run efficiently on devices with 1GB or less RAM.

Flexible targeting options: New hardware feature constants to let you target the distribution of your apps to normal or low-RAM devices through Google Play.

Google Play : While all apps will be available on Android Oreo (Go edition) devices, Google Play will give visibility to apps specifically optimized by developers to provide a great experience for billions of people with the building for billions guidelines.

Files Go App: This will make finding and sharing files easier. This new app allows budget handset users to delete content easily in their handsets, find files, photos and other content faster than before and share files even in offline mode. The files transferred are fast, free and encrypted.

Assistant Go App: AI designed to run on less RAM with this app. Google has also introduced the ‘Go’ version of the Google Assistant AI. Called Assistant Go, the AI performs pretty much the similar functions as the regular version but is moderately more customised for India when it comes to search results.

Maps Go App: This app comes with India-specific two-wheeler features and more.Highlight of the new Maps Go app is the new ‘two-wheeler mode’. The particular mode gives motorcycle and scooter riders different navigation needs including ‘shortcuts’. It has already launched in India and can be used by any Android user.

Google Go App: This app brings better contextual search results for Indians. Google Go is the stripped down version of the search app. The app comes with easy search options and even shows trending queries while searching for content. It also comes with better contextual results on India-related information. The app weighs less than 5MB and is said to save up to 40% data.

Improved Youtube Go App: There are enhanced data saving features added to Youtube Go App. It is a wrapped down version of of the existing Youtube App. It has been said that the app saves more data than before and weighs less as well.

To get latest updates directly into your mail box, subscribe to our newsletter.