Comparison Between Angular and React 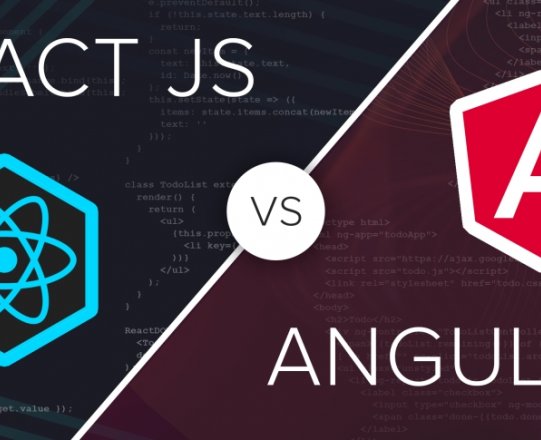 This is a hot discussion.

Angular is an open-source front-end development framework that was launched in 2010 to build applications for the web.

React is an open-source front-end JavaScript library released in the year 2013. It was developed by Jordan Walke and is supported by Facebook. React is powered by dynamic code samples that help you create interactive UIs.

Well, we need to know about both platforms in detail to find out which rules the other in development aspects. It is important to have a close look at both development technologies.

Let’s learn about the main differences between them:

Performance: When we compare the performance of Angular and React, React wins the race.

This is because React depends on virtual DOM which makes it agile. When you make changes to an application, only the modified sections get updated on the real DOM.

However, Angular uses real DOM. When you make changes to a specific section of an application, the complete real DOM gets updated. This impacts the performance of Angular.

Also, React deploys a unidirectional data structure that transfers the data in one direction only. Angular implements a two-way binding structure that enables to make changes in the UI and model view.

React doesn’t comply with dependency injection. This is due to the immutable data and functional programming attributes of React.

Learning Curve: Angular has a steep learning curve as compared to Angular. The developers of React development Company need to understand basic concepts such as decorators, modules, and others. Angular displays error messages making it easy for developers to track the bugs.

It is easy to master React as compared to Angular. One can easily handle React if he/she knows how to work with JavaScript.

Which One to choose?

Angular is an ideal pick to create real-time messaging and enterprise level applications.

In a nutshell, you should consider using React when you want to create lightweight applications. Plus, it is a great option to create an intuitive user interface and make updates to existing applications.

Now that you know the differences between the two, you need to ensure which framework will be appropriate for your next project.

Should you choose Angular and React for your next web development project? Speak to our experts at Mitiz Technologies who will help you make the decision. Take advantage of our expertise to fulfil your business project requirements.

Drop us a message and we’ll get back to you soon.